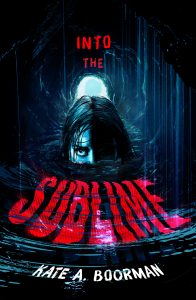 When the cops arrive, only a few things are clear:

AMELIE DESMARAIS’ story begins believably enough: Four girls from a now-defunct thrill-seeking group planned an epic adventure to find a lake that Colorado locals call “The Sublime.” Legend has it that the lake has the power to change things for those who risk—and survive—its cavernous depths. They each had their reasons for going. For Amelie, it was a promise kept to her beloved cousin, who recently suffered a tragic accident during one of the group’s dares.

But as her account unwinds, and the girls’ personalities and motives are drawn, things get complicated. Amelie is hardly the thrill-seeking type, and it appears she’s not the only one with the ability to deceive. Worse yet, Amelie is covered in someone‘s blood, but whose exactly? And where’s the fourth girl?

Is Amelie spinning a tale to cover her guilt? Or was something inexplicable waiting for the girls down there? Amelie’s the only one with answers, and she’s insisting on an explanation that is more horror-fantasy than reality. Maybe the truth lies somewhere in between?

After all, strange things inhabit dark places. And sometimes we bring the dark with us.

“This disorienting, claustrophobic, and genuinely frightening thriller follows the four girls as they descend into the darkness. With well-developed, sympathetic characters, a taut plot, and an unreliable narrator, the novel straddles the line between mystical and psychological horror to keep readers guessing to the end… A sublimely scary thriller.”

“Boorman successfully spins a story that quickly disorients the reader, mirroring the characters’ experiences as they descend further into the unstable cavern, and the suggestive storytelling effectively builds upon the lore… This intriguing blend of paranormal lore and psychodrama will warrant a second read from genre-savvy readers who want to know if they missed clues or were misled down a rabbit hole.”

— Bulletin of the Center for Children’s Books, starred review

“Claustrophobic and slippery with surprises, this supernatural thriller takes place in one of the most overwhelmingly eerie cave systems to exist on the page… The overarching tension becomes progressively tangible with an unreliable narrator and seriously creepy descriptions.”

“Gripping and breathless, Into the Sublime is equal parts terrifying, claustrophobic, psychological, and cunning. What a ride! I found myself clutching the book, unable to put it down until I learned how it ended. Completely heartstopping! I’ll be haunted by this one for months.”

— Wendy Heard, author of She’s Too Pretty To Burn

“Heart-pounding action sequences keep the pages turning quickly and the vivid setting immerses readers inside the damp darkness believed to house paranormal monsters… Fans of atmospheric and psychological survival novels will race to the end of this horrific nonlinear adventure.”

“A well-constructed thriller that explores guilt, identity, and authenticity.”

Local readers can order here or here and support an independent bookstore! 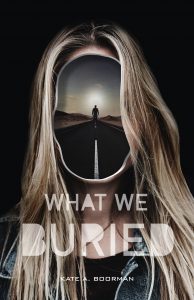 DO YOU EVER JUST WANT TO BE BELIEVED?

SIBLINGS LIV AND JORY BREWER have grown up resenting each other. Liv–former pageant queen and reality TV star–was groomed for a life in the spotlight, while her older brother, Jory, born with a partial facial paralysis, was left in the shadows. The only thing they have in common is contempt for their parents.

Now, Liv is suing her mom and dad for emancipation, and Jory views the whole thing as yet another attention-getting spectacle. But on the day of the verdict, their parents mysteriously vanish, and the siblings are forced to work together. Liv feels certain she knows where they are and suspects that Jory knows more than he’s telling. . . which is true.

What starts as a simple overnight road trip soon takes a turn for the dangerous and surreal. And as the duo speeds through the deserts of Nevada, brother and sister will unearth deep family secrets that force them to relive their pasts as they try to retain a grip on the present.

Told from the split viewpoints of Liv and Jory, What We Buried is a psychological thrill ride that deftly explores how memories can lie, how time can bend, and how reconciling the truth can be a matter of life and death.

A February Must-Read by Hypable

“Fans of weird stories will love this Twilight Zone-esque mystery. Every page invites new questions about what is happening and what is real, sucking readers into a funhouse world they will not want to escape. . .  The journey this novel takes is compulsively entertaining.”

“Nothing is scarier than utter disorientation, and Boorman’s road trip to hell wrings that fear for all its worth. It’s Twilight Zone by way of David Lynch—unclassifiable and deeply unsettling.”

“A disintegrating distinction between life and death is a known marker of mental meltdown, but also of spirits haunting the scene of a crime. What We Buried skillfully alternates the two sides every story has, unafraid of clarity with one foot in bafflement.”

―The Center for Fiction

“The key to a truly successful mystery/detective story is the author’s clever use of misdirection, and in What We Buried, Boorman succeeds masterfully…[A] great read, one that will definitely play with readers’ minds.”

“…Liv’s and Jory’s alternating perspectives poignantly reckon with their individual and shared past and present. The author deftly handles a number of issues, including disability and the skeevy underside of pageants and reality shows, but the overarching theme is a sensitive exploration of child abuse and neglect. Vexing, poignant, and thought-provoking.”

“Keep[s] readers on their toes all the way up to the intense ending, but the emotional reconciliation, which is clearly what’s been at stake here all along, enables a sense of just deserts for all involved.”

―The Bulletin of the Center for Children’s Books

“A wild ride, taking the unreliable narrator to the next level.  What We Buried has an ending you won’t see coming or easily forget. Pay attention to the details and read this book twice.”

“Fans of unreliable narrators and carefully crafted mysteries are in for a treat with Kate A. Boorman’s What We Buried, a relentlessly trippy narrative packed with family drama and unexpected chills. Their journey together is part mystery thriller, part mind-melting breakdown of time and space as we know it.”

IN THE WOODS OUTSIDE EMMELINE’S SETTLEMENT, a powerful enemy lurks, one that wiped out much of the population generations ago. Inside the walls, Emmeline is watched for Waywardness—the rule-breaking behavior that sent her grandmother to her death.

Emmeline knows she shouldn’t go into the woods or seek answers to the questions no one will ask. When one of the settlement leaders asks for her hand, she could wipe the slate clean, ridding herself and her family of the Stain of her grandma’s crimes.

But there’s something out in the woods…and it’s calling to her.

“An engrossing romance, set against a chillingly vivid repressive society. WINTERKILL will haunt you.”– Julie Berry, author of Carnegie-shortlisted All the Truth That’s in Me

“Boorman’s frontier may be the stuff of myth, but her protagonist speaks directly and powerfully to a young adult experience.” —PUBLISHER’S WEEKLY

COUNCIL HAS FALLEN. THE THAW IS here. The world outside Emmeline’s fortification awaits. Urged on by her dreams, Emmeline sets out with her new friend Matisa and her beloved Kane, venturing into exhilarating wilderness, into freedom, into the unknown.

The secret that has secured peace for Matisa’s people for generations has been compromised. Newcomers are arriving, laying claim to the land and bringing unimagined horrors. Emmeline vows to help Matisa warn her people, but with new perils at every turn and the enemy closing in, she finds herself faced with an impossible choice: Forsake the friend who saved her life or abandon the boy she loves.

EMMELINE AND HER FRIENDS have arrived in the safety of Matisa’s valley. But trouble has followed.

Matisa’s people, once protected from a sickness that deterred newcomers, are now dying from the disease. Worse, Dominion soldiers are arriving with brutal weapons, claiming the land as their own. They’re also desperate for a cure.

To regain their upper hand and negotiate peace, Emmeline and Matisa must discover a new remedy for the sickness—fast. But their dreams reveal an unexpected path: they must return to the stifling settlement Emmeline was so desperate to leave.

With war on the horizon and dangers closing in, Emmeline must confront her past and risk her life to secure the future that burns in her heart.

“The theme of acceptance among different types of people in order to attain peace is strong, clear, and never more relevant.”— SCHOOL LIBRARY JOURNAL